I have been keeping my log over at turbobricks. But i though you guys might find my build interesting so i'd share some of it here too!
I have spend about a half a year building a street 360 into a Volvo 360 Cup car.
Here in the Netherlands we have a whole Cup dedicated to 360's. The idea is that with minor tuning you can compete on the tracks of zandvoort, SPA, Assen and Zolder.
Costs are "low" so you can race a season of 8 racedays/weekends for around 10,000 euro's. still a shitload of cash so uless you are loaded you need to look for some people that wanna sponsor you or company's that wanna get there name on your car. Also visit my website www.brick-autosport.com if you wanna shave up your dutch (not that its flawless dutch

Anyway here are some pics from the build

when i first got her:

Some parts seem to be missing:

thank god for the part scar i bought not much later: 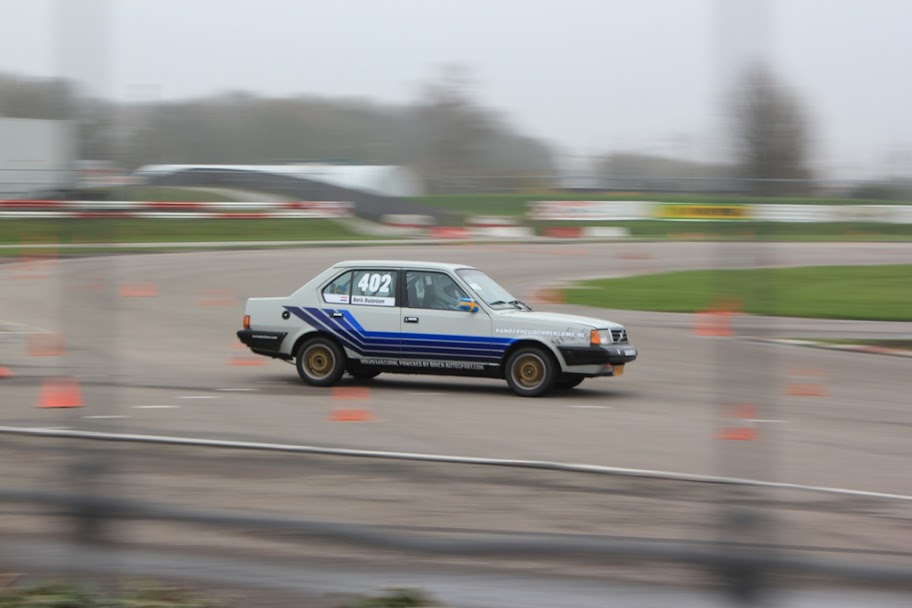 First race is upcoming sunday and the guest racer is Jan Lammers, you know the guy who drove the 850 BTCC
Also if you feel like getting your name on the car and help me out a bit in the costs you can buy a brick on the car and get your name or anything that fits 20x5CM stickered in there

Costs are 50 euro's a season or hit me up if you got parts that can help me out. i can always use brake pads ect and other wear items as well for performance parts. I take paypal

Good work! It's great to see a ratty car get saved, and the result looks fantastic. Hope you have a good time with it


volvosneverdie wrote:Vnd says:
diffs, are like pubs and legs.
Best appreciated when open.
I probably should have specified ladies legs in there too. [+=] "embarrarrased emoticon"[].com

Yesterday was my very first race ever. Day started at 6:30 in the morning for me. After checking in and paying the nice lady 250 euro’s for the day the car was up for inspection. I moment I have feared ever since I start building the car. There are allot of rules and things you have to keep in mind but since I also had to keep the car road legal it was not a 1+1 thing.

Anyway the FIA/KNAF approved the car rater fast so my gear was next up. Apparently my helmet was not approved by FIA but some other seal of approval. After a long discussion I could pass with the message to get a new one after the race… great.

First where warm-up and recon of the track laps. No real racing there still only after 3 corners the 360 sedan in front of me (also a rookie) decided to cut me off. Leaving a enormous hole in the side of his car. I saw bits and pieced flying around and I was thinking nooo wayyyy my car is going to need new lights, bumper side panels aarggg ass**** Car still drove so I overtook him and had a few more laps.

Back at the Mike07’s mobile home/tent/awesome catering place i had a change to take a peek at the damage, a small scuff on the bumper, little bump in the side panel I was able to bounce back by hand and a broken turn signal. Thankfully Mike07 had a spare one so within 10 minutes she was back to normal! I had several 300 drivers coming to me telling me I was spilling fuel in the corners like crazy. With is odd since replaced all the lines under the car.

Next up was the first qualifying. I really noticed that on the long straight I just lost allot of time, all the 360’s where running away from me there nothing I could do. In the corners I was able to keep up with some of the rookies but that’s it. I also had problems with the fuel in sharp corners. Straight out bad qualifying for me. Than after just a few laps she died.. So I got to play angry birds on my iphone for 10 minutes and look at racing 360 from really close.

I got towed off and left guessing what could have been wrong. My fuel gauge said empty but I was on a hill for a long time and I really put in a full tank.. Could I have spilled it all on the track?! Thankfully a nice lady in a race suit came up to me “ahhh are you stranded here all alone?, here let me help you hop in the car I’ll push you” To bad when I was rolling she waved at me and walked away again..

Anyway I was at the pump so I could at least put in my last 16 euros (like 5 liter?) in there. Still turning but not running. By then Mike07 arrived and my neighbor so they helped me back to the paddock.

Then with a family member of Mike07 we worked out that the fuel pump was not working. We finally narrowed it down to the wiring and got her running again. Just in time for the first race. That went just as well as the qualifying. I totally missed the start and lost 4 second on the group there. And they just kept going further and further away from me. I was kind of pissed I did a whole race without seeing anyone. I got bored so decided I should try drifting the corners and mess around with effected my time.. silly me.

Then the final race was there. 3 placed from the last (some 300’s broke down) so I had a change to not be last. I was feeling confident I could do better and the 300 was purring again so I had to show them what we could do.

During that race I was my own DVD director commentary jelling that we could take over that stupid sedan in front of me (the one that hit me) that was my goal for that race. He was faster but he seemed to be driving even more clueless than me so I HAD to get this one. Bumper on bumper race but when we get to the straight I would leap away again but it was so close.

Then the gods where mercifully.. I saw some white smoke coming from his exhaust. YEAHH!!!! I know I’m horrible but I was gaining again and got passed him. We had our own little fight for a place in the back. It seems sad but I had SO much fun.. sure made up for all the crap earlier on the day.

All in all I think I might have had a bit too high expectation of myself and the car, competing with guys who are all much more experienced or at least have a race history unlike me. I ended up having a very good time. I’d like to thank Mik07 and his family for being there for me and putting sandwiches and drinks in my mouth else I’d portably had killed myself on the track.

Thats a really nice turn around, you've taken a shabby, sorry looking for itself saloon and transformed it into a rather nicely turned out and purposeful looking racer. The graphics set it off, quite simply awesome job

Good on you for getting out on the track aswell, it doesn't matter if you are up with the front pack or not aslong as you enjoy yourself and it looks like your having loads of fun. Id quite like to go on a track but i'm just too much of a pussy

89 3dr 340DL in Battleship grey with Ultralights and Williams power
Whats the matter with the car i'm driving can't you tell that it's out of style?
Top

magnumpi wrote:
Good on you for getting out on the track aswell, it doesn't matter if you are up with the front pack or not aslong as you enjoy yourself and it looks like your having loads of fun. Id quite like to go on a track but i'm just too much of a pussy

Looks like lots of fun, good that you got the car sorted in time for the race and kept in there

Living the 300 dream! I want to get back out on track, your car looks great!
Top

Nice work dude. Not toooo many problems then!

Thanks for all the nice comments, glad you guys like it