Car's all bolted back up, turbo's in, boost tubes made up and looking OEM

still gonna try make the standard airbox fit but using a foam air filter at the mo. Oil relocation kit's in, oil and water feeds etc. Got a leak from the cut bottom coolant hose T-piece but can sort that.

Tonight we came to test fire it. on ignition, the fuel pump primed but when turned to start the starter solonoid clicked but didn't turn. We pulled the starter out and found it to be ok. Guess is that the 360 starter is incompatible with the 940 LH flywheel. I was far too knackered and fed up with the thing to go find the 940 starter so called it a day despite John's best efforts to make me try.

Still, I'll swap the starter and fix the coolant leak in the morning, give her a test start with no ignition to get the oil and water flowing so I can check for leaks, if that's all good I'll find a coil lead and see if it starts. Then it'll either be a good multimetering to see what's wrong or crack on making the downpipe a bit better, connecting driveshafts and gearlinkages, securing some loose wiring and giving it a bonnet and bumperless test run

startermotors should all be the same, make sure the batterycables are tight, and no water between the connections!
Top

Well today I swapped the starter for the 940 one. It did exactly the same as the 360 one, could hear the thing click into place but not turn :/ we had a look into the bellhousing and found the clutch was wedged against it. We loosened off the bellhousing bolts a couple of mm to free the clutch and lo and behold the engine turned once more. So i'm going to make some 3mm spacers which I can slot in to this gap and stick the bolts back through. I still have a spare bellhousing kicking about so will use that as a template. I don't see any problems with spacing the bellhousing back 3mm off the engine, I'll make the CPS hole 3mm longer so that fits. Got a top rad hose to cut to fix the big coolant leak so that's good, and I'll find a coil lead from somewhere.

Me and John making some oil lines for the filter relocation

This amazing fit needs to be utilised somehow

The lack of room and the oil relocation takeoff

OEM looking at this angle too

It's in there somewhere

Was this the problem?


Ran into some problems with the clutch, was hitting the bellhousing 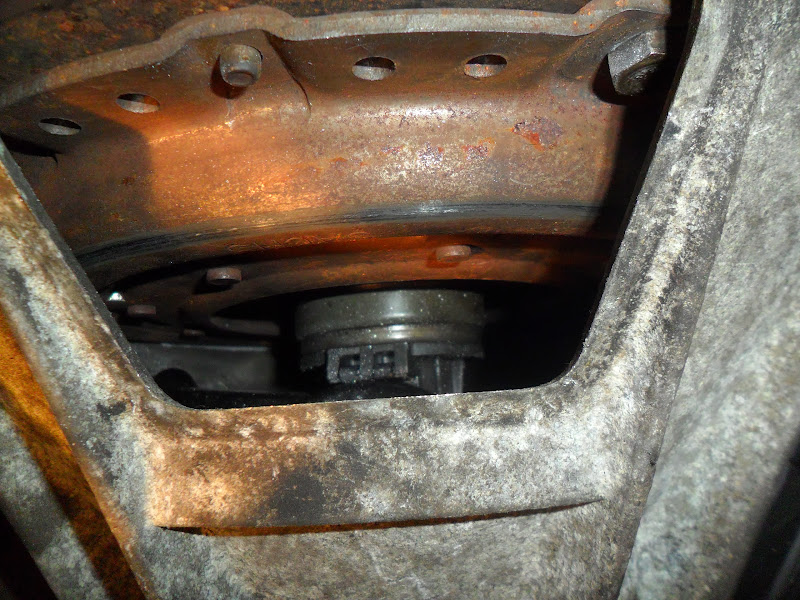 Looking good, mate.
You know I got spare MS for you to use. If you have any issue in the future, you know where to come over!

Do you want to get 3mm spacer cut by laser cut?
If so, you have to bring spare bell housing so I can make you a spacer.
May be some other peoiple might needed after seeing your project!?

Atchi I may well do, And yeah I've seen / heard a few people with the same problem. Would be good to find out an exact distance which would work well if you were to do a few of them. I reckon 3mm should be fine but will check with washers.

Great work! It's coming along nicely - some nice attention to detail too

Well, spaced the bellhousing what's got to be less than 2mm. Turned the engine using the starter, all went fine. So connected everything up and...

misfiring like anything but I'm using the wrong type of king lead, bent to try and make contact enough, although it did idle nice at one point. Had to fix an oil leak or two and re-make a coolant hose but i 'think' oil and coolant should now be fine

The ecu needs some time to adjust, I guess that after 5 minutes of running the car will sound better!
Top

Yeah, hopefully it should sort it's self out.

John fabbed up a downpipe yesterday, was made mostly from the stock 940 one, cut the turbo mating flange off, welded to a 90 degree bend straight down, another straight to the back of the car then a 45 degree in behind the bellhousing and a final 45 to bring it straight under. He then put 2 O2 sensor bosses in, the factory one in at the top, the wideband one under facing forwards. we also utilised a standard 360 downpipe bracket which bolts onto the torque tube to bellhousing 'studs'. I wrapped it up in heatwrap and we stuck it on the car for a test start.

And the test start

Had no coolant in so we cut it short, had been running a fair bit between too

Looking good!
Do you want to come over to help my Mini?
Reward will be showing you how to make 350bhp out of 1300cc engine!

Let me know the size you need laser cu then I will get it cut for you.