Can't say I profess to know much at all about carbs... but the Haynes book of lies suggests that removing the 5 screws from the circular cover plate on the carb and it should come apart from the main carb body? Am I being dense (probably) or is it just bloody stuck solid against the gasket

Only just caught up with the latest developments. When I first got my 83 GLS, (it had already been put back on the road by someone else) I had fuel starvation problems. The car would cut out (while driving it) and wouldn't restart at first but after 15 min ran again. At the time I put it down to bad fuel/debris temporarily blocking the pipe between the tanks whist driving quickly on bendy roads! Or bits in the fuel blocking the carb. I carried on and it seamed to stop happening. A year or so later the fuel tank sender was still jammed (as it was when I got the car). When I replaced it, I found a lot of white corrosion products (from the metal galvanising) on the fuel pipe inlet filter. I now think that occasionally a flake of this material must have got sucked across the pipe. have you checked the sender/filter condition? It might be full of gunk, would hand pumping have a bigger pull than the carb an so drag fuel through where the carb might struggle?
360 GLE Saloon (D 86)
360 GLS (A 84)
343 DL (W 80)

Thanks for that Andy - I haven't checked the fuel sender/filter condition, actually. It certainly sounds like another plausible explanation!

I'd imagine hand pumping would give a bigger draw than the fuel pump but I am getting fuel when cranking it over so that's why I suspected the carb. The carb is currently off the car and I've given it a good clean, not obviously dirty but fuel is horrible nasty sticky stuff when it's old - so it could be, should know when I get to refit it.
1989 - Volvo 360 GLT
1985 - Volvo 360 GLS
2008 - Volvo S60 SE Lux
Top

You'll know when you take it apart, let alone when you fit it

On one of the Mk1's that Foggy owned that had also been stood for many a year we had a similar problem. Fuel was getting through but still no start.

Upon investigation we found that although the old stale fuel was still in liquid form in the tank and the lines, it had turned into a horrible jelly like sludge in the pickup tube in the tank. Once we'd cleaned this through (and replaced the rubber hoses) full pressure was restored and she fired up.
Terms and conditions apply. This post may go down as well as up. Regulated by the Financial Services Authority. Hard hats to be worn. No reversing without a banksman. No admittance to unauthorized persons. Stop that. Put that down. Leave that alone.
Top

Been away for the weekend in the 300 series home country so haven't had any time to look, but Rupert's suggestion would give similar symptoms to what Andy suggested too. To me the carb doesn't look obviously gummed up - if you're suggesting gummed up fuel makes it look a right mess

Well I've taken the pickup tube out, cleaned the filter at the end (it was a slight bit gummed up), replaced all the braided type hoses with fuel injection style hoses, chucked another 5-7L of fuel in (embarrassingly I think this was the problem!), pre-filled the carb float chamber and it now runs - sounds super smooth for a redblock!

Will need to take it out the garage to let it run for a longer period tomorrow... it's burning off quite a bit of the remnants of penetrating oil off the exhaust manifold from undoing the down pipe, so it's a bit of a smoke machine in an enclosed space...! I think I may have buggered up the choke cable at some point (or there's the possibility it's never worked) as the cable doesn't seem to do anything when using the lever in the car... a tad inconvenient!
1989 - Volvo 360 GLT
1985 - Volvo 360 GLS
2008 - Volvo S60 SE Lux
Top

Well it turned it's first wheel for circa 5 years yesterday, at least I know the clutch and gearbox work

Brakes 'feel' ok but still need the fluid changing, but they stop the car and there are no leaks. The only surprise was non-PAS as I'm so used to how the GLT feels

I think it's running lean as it runs better whilst choked. I don't get a squirt of fuel when the choke is off from the accelerator pump jet (diaphragm? blocked jet?) - so I'll take it apart properly now I know the car will run and clean the jets and replace with new parts. Contacted The Carburettor Hospital to see if they have any kits for the Solex 34/34.

- Speedy cables finally returned the choke cable I sent to them (thanks Ride_on) and have done a good job, so that's been fitted. The outer and inner were both moving at the same time, and my original cable had a section snapped off at the carb end. Don't bother with them if you wan't a quick turnaround though - it took nearly 4 weeks. 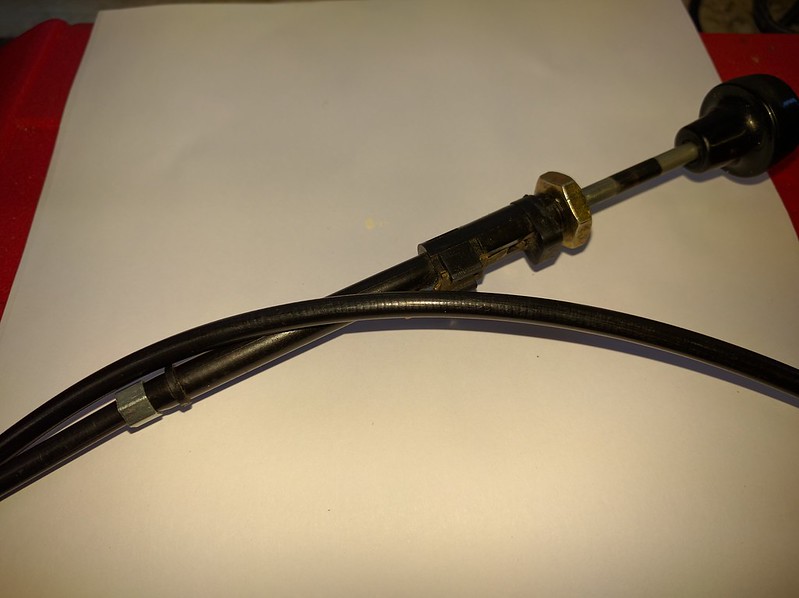 - Bought a set of Leo's from Derskine and had them refurbed and shod with some new tyres, nothing fancy
Before: 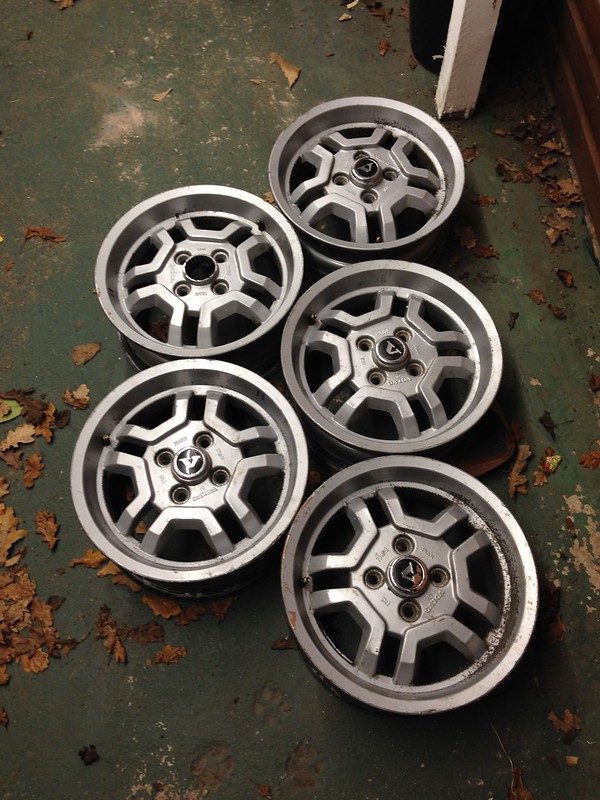 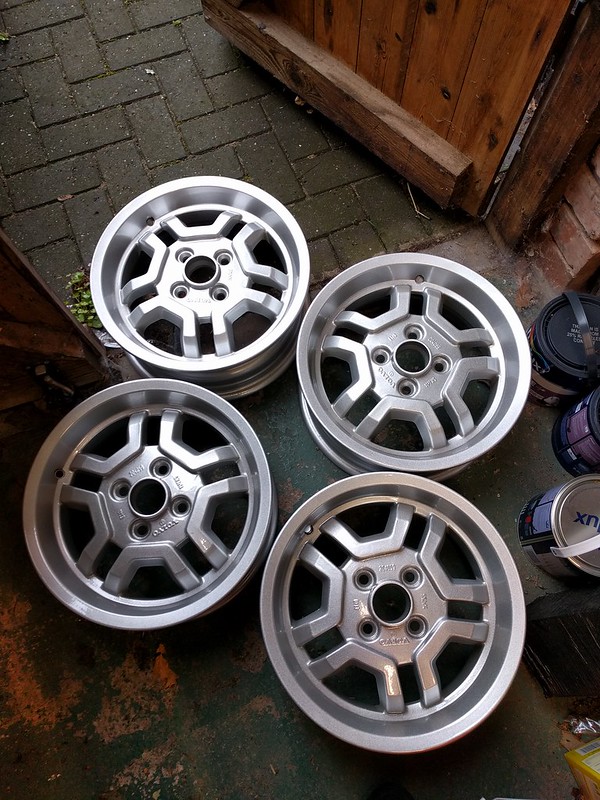 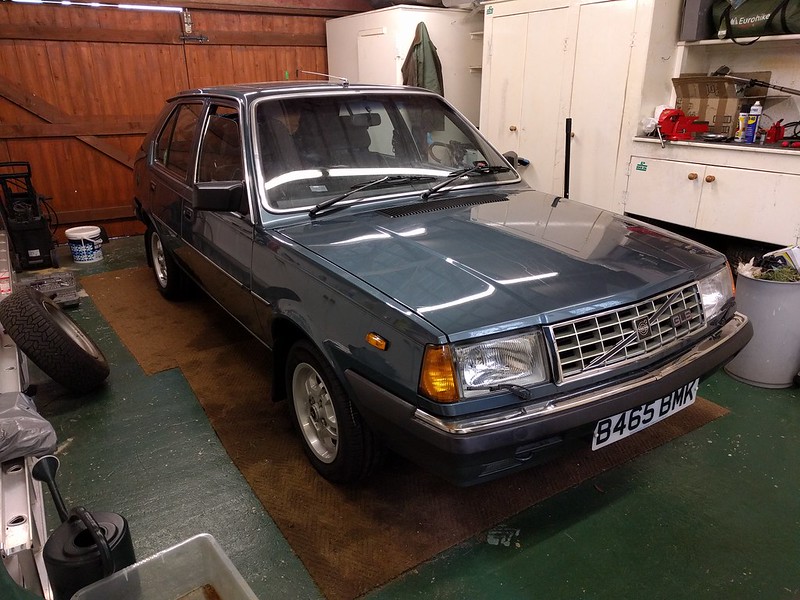 - I've switched the brake fluid and bled all the brakes. The previous owner was a legend and had greased all the bleed nipples so they all came undone without issue

I'll book an MOT in the next couple of weeks and see what the deal is! 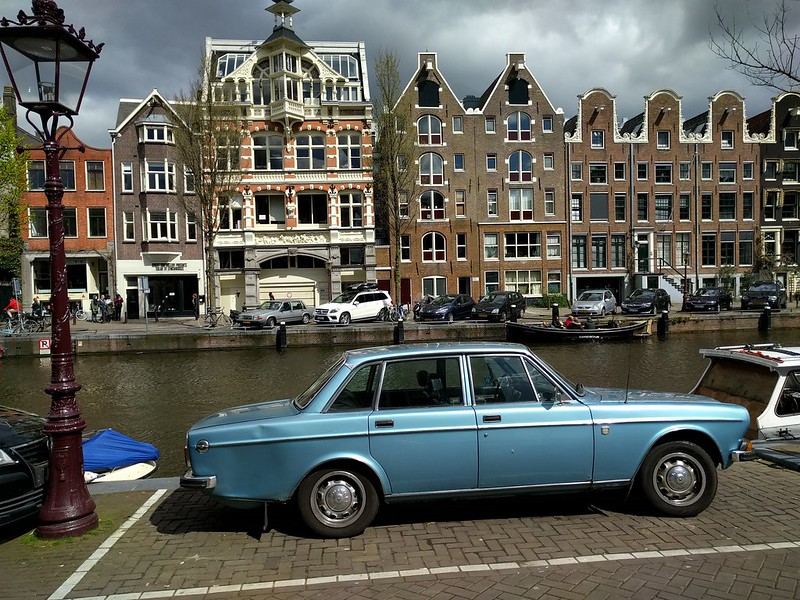 Loving the Leo's too, really want a set for myself now

Hi mate.
Your car looks absolutly stunning.
Are you and Ride-on having a comp to see who has the best 360

Haha, cheers guys. I think Ride_on wins that competition - plus he'll be off in the distance with that boosted engine

Barely anything original left in mine, lol. Factory paint is much better than anything my truck painter did, and I've ruined all the good engineering Volvo did. LH engine mount just expired, she canny take it.

Those refurbished Leos look superb. Must try and get mine done some time ...

Well done on getting the car up and running again, it looks like the effort will be worth it.