Looking at you pictures, why does the idle air valve have a airfilter on it? It should regulate the amount of air going around the throttleplate at idle.
Top

I saw this anywhere like that, but don't know how it was mounted before!
Top

The high rpm won't be because of the lack of vss otherwise it will go mad every time you stop. Seems you are letting in air via the idle valve.

Hi, i need to connect the last water sensor to 32 & 15 on Ecu, i think that's why the engine idles like that... but you think it's because of the idle air valve?
The tank is the original, placed on top, i've used an external Bosh 044 Fuel pump and new hoses!
Top

Just going on what the others are saying, I'm not knowledgeable on this engine. Wouldn't be good on an LH2.4.

So the underside photo just didn't have the tank in? If you are trying to suck put of the top of the tank you may have a problem, its not designed to do that especially if you are using the original carb feed pipes in the top. The 360 injection feeds out of the bottom of the tank with a 12mm pipe feed, other cars use an in-tank pump. Others have tried using the 2*8mm pipe lob joiners at the bottom of the 360 carb tank and it didn't work.

The original tank (340) was placed in the "trunk"! I don't use original hoses, just a reducer from tank to 8mm (in) injection hoses...
Maybe i need another fuel pressure regulator than the original f7p one? But i just need 3b pressure!
Top

It's nothing to do with the regulator, I think the explanation is that the pump cavitates like propeller driving too hard because it can't get fuel from the tank quickly enough. It needs a large inlet to the pump assisted by gravity or an internal lift pump. Simplest solution is to fit an in-tank pump.

Certainly one of your idle problems is the idle solenoid. Mine was plumbed up exactly as you have it now, I took it to my MOT man and he (being a knowledgeable chap) said that it was a warped carb base being a 1.7. I said it wasn't a warped carb base, have a look under the bonnet, which he did and straight away saw the idle solenoid with the filter the same as you have it.

Long story short, he pulled off the filter and put his hand half over the "inlet" to the ICV. The revs went from fluctuating (literally revving itself a bit) around 2000-2500 to a steady 850.

I can't find a good photo of it, but take a hose from the manifold under the throttle position sensor plug in the photo 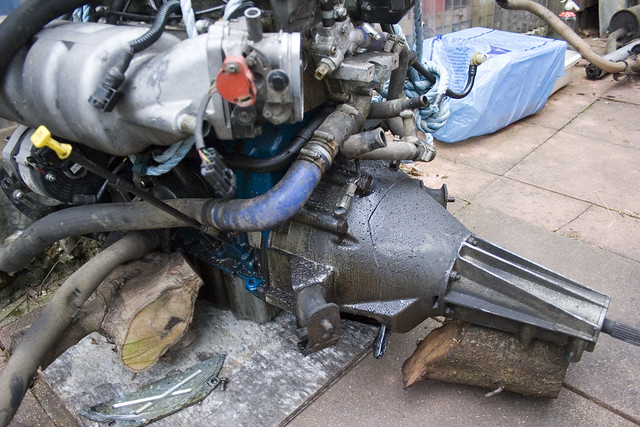 to the ICV, then another from the ICV to the hose between the air filter and the throttle body (easy to do if you have the original Renault hose)

There are other things it could also be, but it will never be right without doing that.

Hi, my speed sensor is from a Volvo 440 speedo, you think i just have to put a 12v on it? I did that before and it was the same problem...
I'm trying to understand the problem you mean with the solenoid, but can't find photos of the original mount... The icv is the red part?
Thx
Top

That needs to be getting air from behind the main air filter, i.e. the air is partially vacuumed, not it's own filter. The red part is the throttle position sensor.

My speed sensor is also from a 440. I got my wiring directly from the 400 series green books (actually, may have been one of the green service bulletins I have, as I can't find it immediately in the pdf versions)

Ahhh, heres the other side!

Oh, i think i have connected the white sensor connection from icv to a water sensor which is on the left side from the water box (Renault 19), but not sure about this!
So i can let 12v on the Vss? 2 wires (module & ecu) are connected on a wire to vss
I need to find a T piece or do a hole in my air box hose!
Top

I've done the connection with the Icv, now the engines idles better but a little high (i think about 1500/2000rpm)

And there's smoke and bubbles coming from the junction between the exhaust manifold and the cylinder head, but the temperature seems to be ok... ??

Little video from the engine:
https://www.youtube.com/watch?v=lSpEsGabghE