thanks Mark, think its gonna be kinda special too!,

have you sprayed the spoiler though?

Hi Dub.
They havn't actually retired me yet but it will happen in a few weeks

yeah mate, just gonna get so many coats of laquer now its not true, sprayed bumpers, everything, practically, have black paint aswell though so that may be handy when ive finished (grill, im thinking). Ive more pics, but re-sizing them all is a drag, so ill get them up asap

thanks for your comments 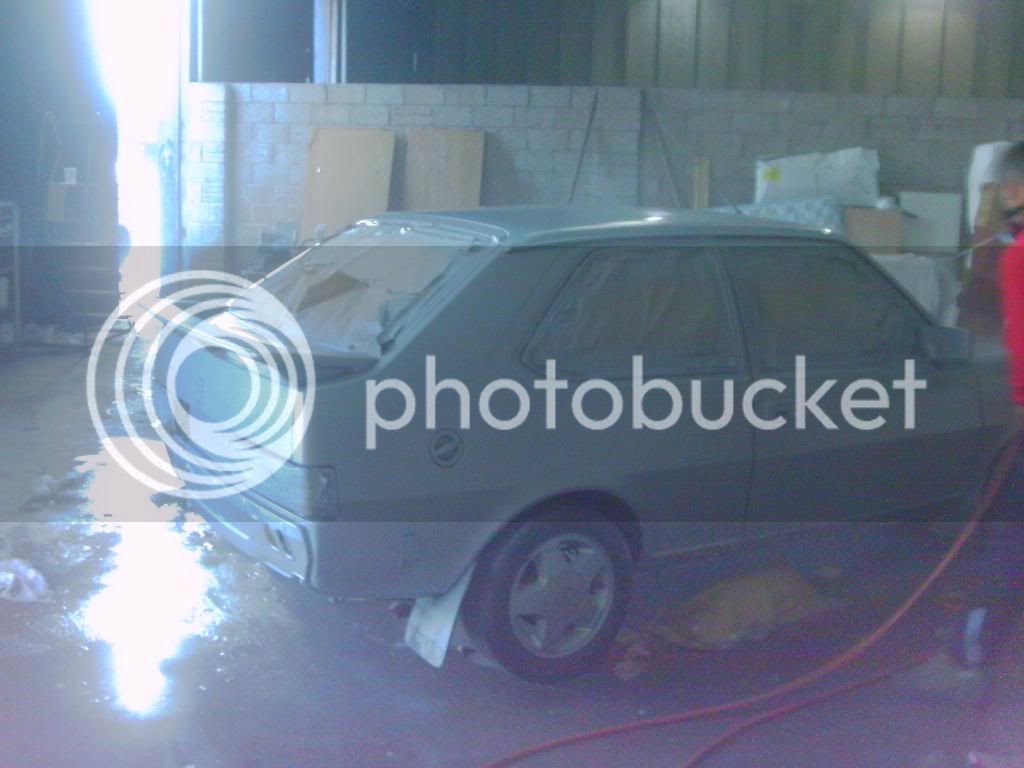 can i just ask you went to all that effort but was it to much to take the headlights and tailights and mirrors off while you done this ?? just saying like the colour
Volvo 340 2.0 Supercharged drift wagon
Volvo 850R 2.3 Turbo
Toyota Celica 2.0 Import
Top

thanks for the comments
If i had my own space i would have done just that!, but i had to ask permission to use this space and all the equipment/paint etc, it was meant to be very short - term, but with work commitments it was more difficult than i had anticipated getting extra hands to help with the painting and having the time myself to do it.

I could'nt strip down and rebuild the car as i didnt know how much time i had and i had'nt really asked permission for that scenario.

I Love that the mirrors and bumpers are now colour coded, i had always wanted them like that. I covered the mirror glass with masking tape. the headlights tbh arent great at 25 year old, my intentions were to rob the headlights off the many door before i sold it, but did'nt get round to doing that, though i may replace them in the future anyways.

transporting the car was difficult to arrange as well, but i think i am nearly finished the paint process, and hopefully i will get my car home at the weekend, then book an m.o.t., then get ripped off for road tax, and petrol, etc naturally, especially in N. ireland as we have highest insurance and petrol price in U.K.

I dont have a garage, just a driveway, ive told the wife if we ever move again i will claim the garage as my own man-space and mark my territory (kinda like a dog does)

and totally understand been in that same position many years ago so cant fault you at all thankfully i have the time on mine! (due to being banned haha thanks government) to many points not drinking mind

ah well no relatives or friends in england you could just say the car is from there insure it there and say you commute alot to n. ireland lol or is the laws more strict than that ?

Be good to have all of us meet up sometime even if it means you grab the ferry over meet somewhere central to everyone ive owned mine since november and i will never look at another car again unless its over the £100,000 mark in price
Volvo 340 2.0 Supercharged drift wagon
Volvo 850R 2.3 Turbo
Toyota Celica 2.0 Import
Top

dubweiser666 wrote: then get ripped off for road tax, and petrol, etc naturally, especially in N. ireland as we have highest insurance and petrol price in U.K.

I'll swap you NI prices for IRL ones. Be grateful.

thanks for the comments's, i do have relatives in england and in fact this car originally came from LINCOLN, i first m.o.t.ed it in Derby, drove it to a job interview in Manchester (didnt get the job) and accelarator cable snapped, and i had to pay a recovery to Derby. got it fixed and i drove it throughy the snow in 2008 to Liverpool and payed for the ferry with tesco clubcard points. WIN!

I once had a chevette many years ago i had insured as being in essex, the insurance co got suspicious and sent me a load of letters, the R.U.C. (police) at that time said "yeh its cheaper if you do it like that", but didnt do anything further, but i dont think id want to try it again.

I have a loyalty card for the applegreen services on the M1 down to dublin, so fairly enjoy getting free costa coffee and food when i go down there, and thats quite alot (twice in past week). Luckily im not using my own fuel to get there!. thanks for the comments

win win situation sadly i wont have mine done till november maybe before but keep up the good work all for seing real cars stay on the road i saw a vaxhuall Adam earlier i wanted to drive into it in the hope i stop it being so depressed for being ugly but i resisted lol
Volvo 340 2.0 Supercharged drift wagon
Volvo 850R 2.3 Turbo
Toyota Celica 2.0 Import
Top

Hi Dub mate.
Yours is going to be the best looking 300 in Norn Iron.
Well done. I have a few spare head lights so if it fails on the lights, give
me a shout and i can sort it out for you.
Cheers Mark.

yeah nice 1 mark, might take u up on that. Bringing the beast home here this Sunday, cant wait my feet are aching, never walked so much in my life