Bit of a recurring problem with this connection at the back of the fusebox. Any clues as to the cause and cure. Given that graphite conducts, cleaning all that carbon off might reduce the shorting ;-? I assume that is what causes the heat ;-? The old pin, which I cut off its yellow wire, can be seen in the above photo next to the one I intend to replace it with. The local spares shop didn't have that pin so I had to remove one with the same thickness of wire from an old connection block in the roof (some of my collection is shown). The plan is to join the yellow wire on the new connector with the original yellow wire on the car with a crimp connector and pop the new pin into the old block. Should be amusing.

I did ask in the shop if they had any proper connection block dismantling tools but he didn't have any in stock, alas, and said that he could only get them from Laser and would therefore be expensive! However, with a bit of brain-aching I was able to locate a broken Poundland mobile phone stylus with exactly the right diameter to do the job (shown above), and after testing it on several of the wires I can confirm that it works. Its the smallest diameter tube of this sort:

A trip to Wilco turned-up one of these fancy connectors which is rated at 32 Amps. Done, dusted and sorted. Nice one, top one, sorted. Nice job Jon, looks a good solution. Would be handy to have a source of new crimp connectors but wouldn't know where to start looking

I see Chris_C had posted up this link a while ago https://www.skandix.de/en/spare-parts/a ... e/1029289/ Thats a bugger as I have literally just received an Skandix order and you have to have a decent order to make the postage worthwhile...!

The connector block you have used looks readily available on Ebay as a 'WAGO' 2-way lever connector.
I am thinking this could be the problem I have at the moment, if so, I will report back and update this thread to keep it under a similar topic for others.

Sorry, been hiding for a few weeks.

I had to buy some of these a few months ago to add the dash illumination wire to the stereo connector (I super briefly mentioned it here http://www.volvo300mania.com/uk/forum/v ... 15#p194996 )

I'm aware they both show the wrong gender, but the part that turns up is correct. The TE catalogue has a good listing, and photo of mine here: 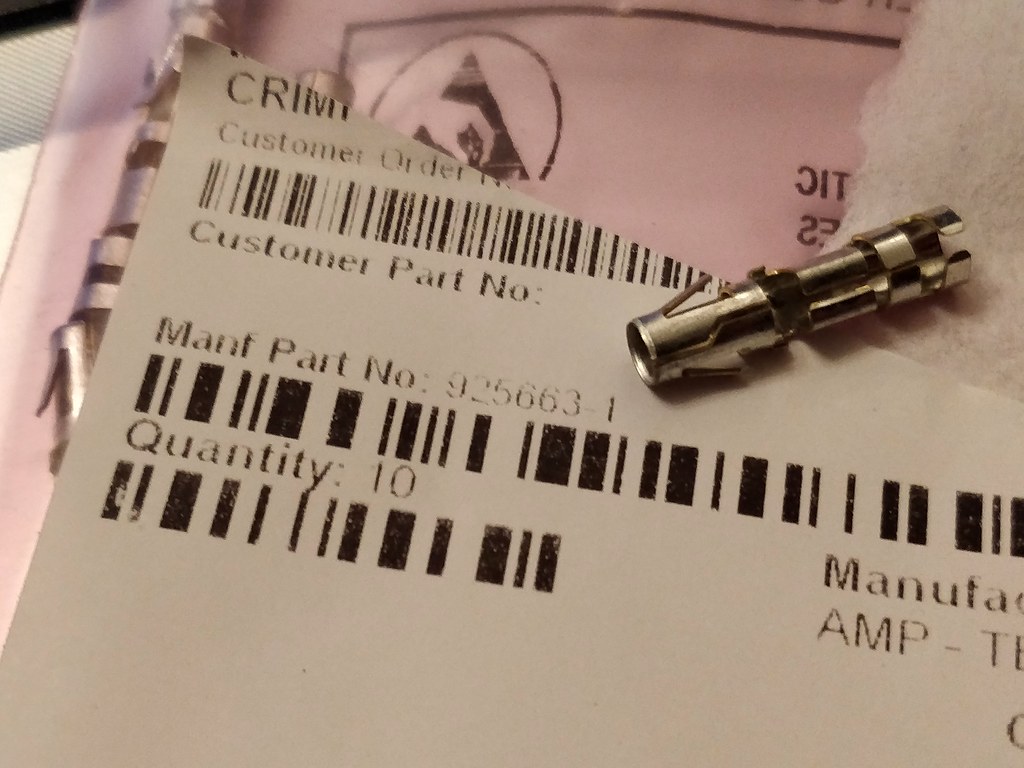 Thanks to both for this thread, I expect it will be very useful to others in the future.
I am going to get some of those terminal sockets Chris, just to have to hand.
I had said to Jon on PM, I assume there is enough slack on the cable to snip off the old socket and crimp on another..? Jon's solution is also rather neat if not

Hello, I've just ordered one of those 59 pcs kits. Should be a chuckle to try it out. About clipping the connector off the yellow wire, I was hoping there would be enough wire left to attach a new connector, but I wasn't sure. It looked a tight fit and would need a heck of a crimping tool, not to mention an expert limbo dancer.

The tool doesn't have to be anything special, I have one like the blue one on here:
https://www.vehiclewiringproducts.co.uk ... ping-tools

But the fiver one would work with a bit more juggling. The key is to form the heart shape with the flaps on the terminal, you want them both sides to curl over on into themselves. RS / CPC etc will also carry the tool.

Mines had enough use that the jaws have worn out now, I did see if I could get new jaws but its not looking great. It's done a lot of terminals though.